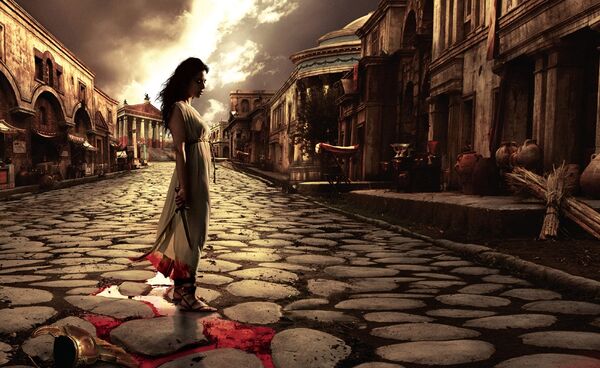 Summary: Caesar has been murdered, Mark Antony emerges from the Senate in shock, only to face Quintus Pompey and his thugs, who immediately follow him to try to kill him. Brutus returns home shaking after the murder. His mother is already plotting the return of the Roman Republic. Titus Pullo asks Eirene to marry him and she accepts. Erastes Fulmen kidnaps Lucius Vorenus' children and sister-in-law. Mark Antony proposes an amnesty to the rest of the senate to keep the peace and allow the Republic to continue. Vorenus says goodbye to Niobe while Rome says goodbye to Caesar. Vorenus and Pullo track down Fulmen to a bath house, where he tells them he killed Vorenus' family.

Summary: Mark Antony is ruling Rome, but Octavian is demanding his inheritance. In the meantime Cleopatra comes to Rome and asks for her son Caesarion to be recognized as Caesar's son. Lucius Vorenus is full of misery, having lost both his wife and his children, and also failed in his duty to Julius Caesar. Titus Pullo asks Mark Antony to help. Mark Antony sets Vorenus the task of ending the gang wars that have broken out in the Aventine after the death of Erastes Fulmen. He uses the goddess Concordia to persuade the gang bosses to meet: they have a superstitious regard for the goddess. When his reasonable offers are rejected by some of them, he commits sacrilege, breaking the image and declaring himself 'Son of Hades'. Pullo is alarmed by this. Vorenus thinks that the gods can do nothing more to him, so he has nothing to fear.

Episode 203: These Being the Words of Marcus Tullius Cicero[]

Summary: As the nomadic Brutus and Cassius struggle to raise foreign money for an army, Mark Antony sets his sights on Gaul. Cicero delivers an in-absentia message to the Senate, and then throws his support to Octavian, the new Caesar. Meanwhile, Vorenus is in a battle of his own, having provoked an all-out gang war in the Aventine Collegium. At Atia’s villa, Octavia passes the hours getting intoxicated by hemp with a nouveau riche tradesman's daughter, while Duro (Rafi Gavron), a duplicitous youth, looks for a chance to set Servilia’s deadly plan in motion.

Episode 204:Testudo et Lepus (The Tortoise and the Hare)[]

Summary: Servilia dispatches a spy named Duro to Atia’s villa. Duro slips into Atia’s kitchen, where he flirts with the cook, then secretly pours poison into the goose stew the cook was making for Atia's dinner. The cook tastes the stew and dies before Atia can touch it. Atia has Timon torture Duro until Duro confesses that he was working for Servilia. Atia then has her men capture Servilia, gang-rape her, and torture her. Octavian badly defeats Mark Antony in battle and begins calling himself Caesar. Octavian sends Agrippa to Rome to announce Octavian's victory to Octavia. Pullo informs Vorenus that his children are alive and in slavery, and they both set out to free them.

Episode 205:Heroes of the Republic[]

Summary: The episode begins with Brutus and Cassius on their march through Greece with their army of 100,000 soldiers to challenge Octavian. Cassius is worried about the grain supply for their army, whereas Brutus is cheerful and talking about saving the Republic. In Cisalpine Gaul, Marc Antony, Lepidus, and Octavian are devising a plan to surprise Brutus and Cassius. They believe their enemies do not know that they are reunited and hope to overcome Brutus and Cassius with an unexpectedly large army. Octavian comes up with a list of supporters of Brutus in Rome and proposes to send the list to Lucius Vorenus and order him to have them killed. Pullo is assigned to kill Cicero. Lepidus objects to the killing of some of the most honorable men in Rome but is persuaded by the prospect of the money the killing would bring to them. They resolve to march to Greece and leave Lepidus in Rome.

Summary: Servilia mourns the death of Brutus, killed at Phillipi. She kneels in front of Atia's door chanting repeatedly for justice. Although Atia ignores her initially, the incessant chanting attracts a crowd of pleb onlookers and annoys Atia. After two days, Atia gets fed up with Servilia's obstinacy and throws open the door to let Servilia vent her anger and leave. However, Servilia calls upon the gods to curse Atia for the rest of her life, and then commits suicide, leaving Atia in shock. Meanwhile Marc Antony, Octavian and Lepidus divide the empire to be ruled by them.

Summary: Prince Herod has shipped in a secret consignment of gold for the Triumvirate, and Octavian instructs Vorenus to oversee its safe passage discreetly into Rome. Vorenus delegates the task to Pullo, who is known and trusted by both Octavian and Mark Antony, much to the ire of Vorenus' third man, Mascius. However, Gaia poisons Eirene's tea, causing Eirene to die in childbirth with a stillborn baby boy. Pullo is incapacitated with grief, so Mascius takes over the operation. An ambush results in the theft of the gold and the near death of Mascius. As accusations fly, Maecenas is convinced that Antony and Posca are the culprits. He had earlier plotted with Posca to steal a portion of the gold for themselves, but now believes that he has been double-crossed. He exacts his revenge by revealing to Octavian that sexual relationships still exist between Antony and Atia and between Octavia and Agrippa. Octavian sends Marc Antony away to Egypt, and Lucius Vorenus joins him.

Summary: Rome is facing a dire shortage of grain, forcing Octavian to barter with Mark Antony to get new shipments sent from Egypt. Mark Antony and Cleopatra continually increase their demands in exchange for grain, eventually driving away Octavian's negotiator. In so doing, Antony hopes to push Octavian into declaring war, which Antony believes he can win due to his support among the Roman people. As a last resort, Octavian sends Atia and Octavia to Alexandria, knowing that Antony will reject his lover and lawful wife respectively. Octavian is proven correct: Antony refuses to see Atia and Octavia and sends them back to Rome. Posca secretly leaves Antony's service and defects to Octavian. Lucius Vorenus, who has been telling Caesarion about Caesarion's father (the boy believes his father to be Julius Caesar, though Vorenus seems to be speaking of Titus Pullo), chooses to stay in Alexandria with Antony.

Summary: After losing the Battle of Actium, a vanquished Mark Antony barricades himself with Cleopatra in their palace in Alexandria. The palace becomes a place of never-ending orgies as Mark Antony and Cleopatra drug and drink themselves into stupor. Octavian sends an emissary to Mark Antony, with a secret message to Lucius Vorenus in an attempt to avoid a direct assault on the palace, which might lead to a popular uprising. It is made clear that Titus Pullo is aware that Caesarion is his son and that Vorenus also knows this. Mark Antony refuses Octavian's demand of unconditional surrender and challenges Octavian to single combat. Vorenus also refuses to betray Mark Antony by opening the palace gates. Practise with Vorenus and then with an emasculated court flunky shows how much Mark Antony's physical condition has deteriorated alongside his mental condition.

Community content is available under CC-BY-SA unless otherwise noted.
Advertisement